BEHIND ENEMY LINES: Thanksgiving Help Before Game Against Giants 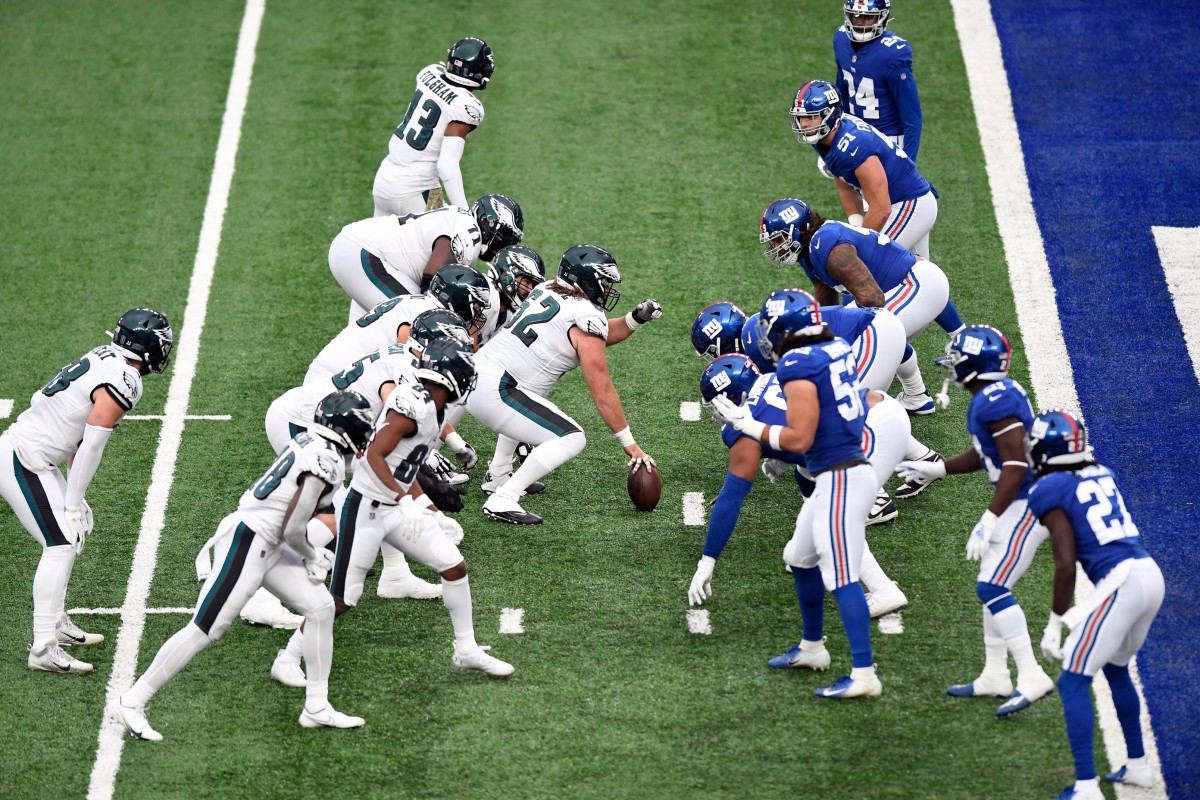 The Eagles got a couple of helping hands on Thanksgiving.

First, the Dallas Cowboys lost again, their second in a row. They are now 7-4 after losing to the Las Vegas Raiders in overtime.

At 5-6, the Eagles are now within two games of Dallas and can make it a game-and-a-half back should they beat the New York Giants (3-7) at MetLife Stadium Sunday at 1 p.m.

Then, in the night game, the New Orleans Saints lost to eh Buffalo Bills. The Saints are mired in a four-game losing streak and sit at 5-6. That's good news for Philly regarding the wildcard race.

The Eagles are surging, winners of three of their last four games, but face a tough test on Sunday against an NFC East rival that won't roll over despite their struggles.

I went behind enemy lines with My SI.com and Fan Nation colleague who covers the New York Giants, Patricia Traina, with five questions.

Has Daniel Jones run out of chances to be the QB in 2022?

Daniel hasn't been perfect, and I don't think he's convinced anyone he can be anything more than a game manager at this point, but until that offensive line gets fixed once and for all, we'll never know how good he can actually be.

What is the mood of team after firing of OC Jason Garrett?

Business as usual. I think there is some remorse on the part of the players because they feel like they let Garrett down. Joe Judge has built a family type of atmosphere so when someone is missing, I think there's a sense of sadness.

I also think there's a degree of motivation in that the players really want to do well, and I think considering Garrett's system is going to remain in place for the time being, I think there might be a sense of wanting to prove to everyone that the system isn't broken.

Giants fans were upset last year when they believed the Eagles tanked and cost them a chance at the playoffs, and Joe Judge said he would never disrespect the game by going out there and not competing for 60 minutes, but it's been a long time since that game. Do you believe this remains a big motivating factor, or bulletin board material, for New York this week?

Actually, that hasn't been brought up at all, at least not as of this writing. I think if Doug Pederson was still the head coach of the Eagles, maybe that would be a bigger story, but right now I think the Garrett story and what the offense will look like have taken center stage.

What are three keys for the Giants to win this game?

The first is third down. Offensively they have to sustain their drives, plain and simple. And that's been a big problem for them. The Giants have converted 37.3 percent of their third down attempts, 24th in the league. You're not going to score many points if you're constantly going three-and-out.

Avoid stupid mistakes. Joe Judge preaches disciplined play, yet week after week you see a stupid penalty or a mistake with the fundamentals creep into the game at the worst possible time. This Eagles team is red hot right now and has shown they can cash in on mistakes. The Giants better figure out how to play a clean game.

Score touchdowns in the red zone. The Giants are ranked dead last in red-zone scoring (44.4 percent conversion rate). Field goals aren't going to cut it in this league, yet kicker Graham Gano has accounted for 38.6 percent of the team's 189 points and it's not even close. None of those points have been scored by receivers Kadarius Toney or Kenny Golladay, which is unbelievable at this point in the season. Can't have the red zone turning into the dead zone and they can't be wasting time with slow developing plays down there, which has been a problem.

Who has been the team's best player and the team's most disappointing, other than Jones, perhaps, would you say?

The best player? That's a tough one because I'm not sure there has been one either due to injury or performance. I think two promising youngsters are receiver Kadarius Toney and edge Azeez Ojulari, but Toney has had trouble staying healthy this year while Ojulari is still wet behind the ears.

The most disappointing player is easy. Cornerback James Bradberry. He was a Pro Bowler last year, but this year, he's come crashing back down to earth. He's missed 23.9 percent of his tackles (currently a career high) and has allowed six touchdowns, also a career-high. And he has seven pass breakups, half of what he recorded last year. That's big-time disappointing production from a guy who's one of the highest paid on the team.