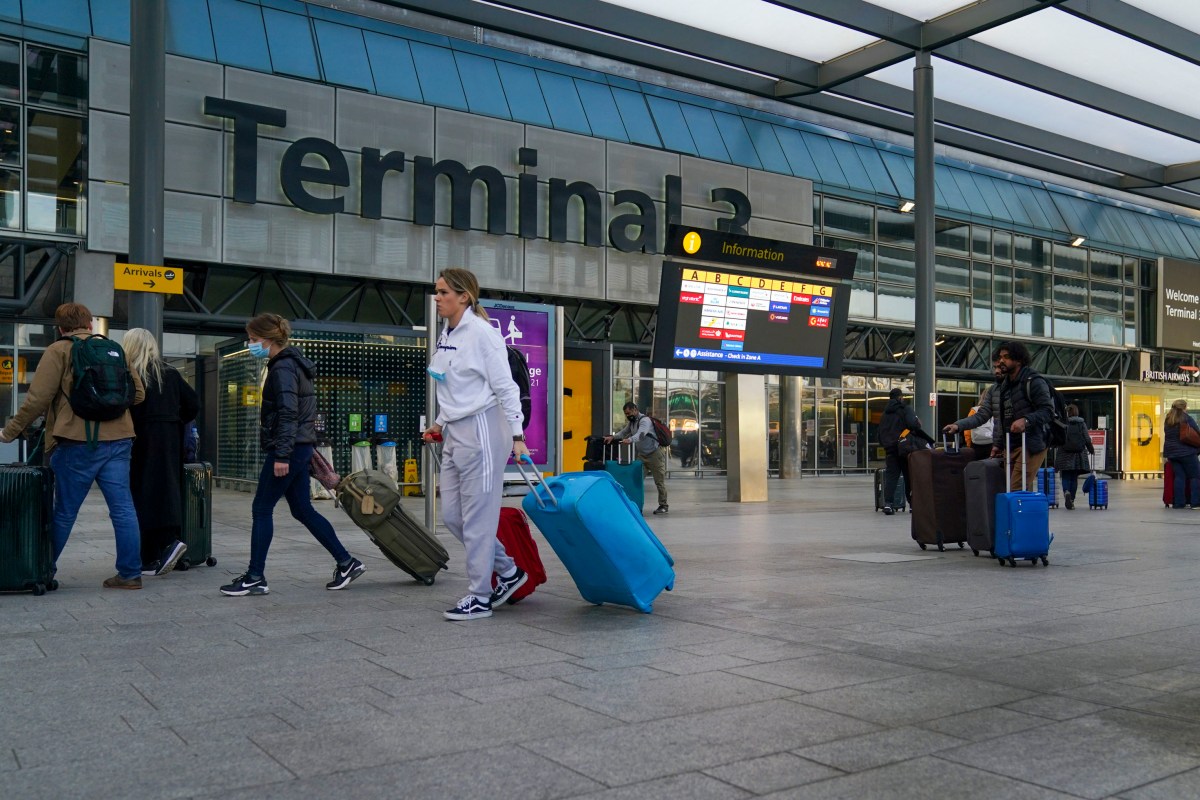 A HUNT is underway to track hundreds of passengers who have recently arrived from South Africa after a new virulent Covid strain was discovered in the country.

It comes as UK officials sounded the alarm tonight over the B.1.1.529 variant, which has the potential to evade immunity built up by vaccination or prior infection.

Hundreds of people who have arrived in the UK from South Africa in recent days are being urged to take a free PCR test as UK health officials hold urgent discussions on how to deal with the new variant threat.

Health Minister Sajid Javid has. confirmed from noon tomorrow flights from South Africa and its surrounding countries Namibia, Lesotho, Botswana, Eswatini and Zimbabwe will be temporarily banned and UK travellers must quarantine.

He said: "We will be requiring anyone that arrives from those countries from 4am on Sunday to quarantine in hotels.

"If anyone arrives before then they should self-isolate at home and take a PCR test on day two and day eight.

"If anyone has arrived from any of those countries over the last 10 days, we would ask them to take PCR tests."

He added: "The early indication we have of this variant is it may be more transmissible than the Delta variant and the vaccines that we currently have may be less effective against it."

So far there has been no confirmed cases of the people in the UK catching the new variant.

But Mr Javid added: "Our scientists are deeply concerned about this variant. I'm concerned, of course, that's one of the reasons we have taken this action today."

Asked what the situation would mean for the UK over the coming weeks, with Christmas approaching, Mr Javid said: "We've got plans in place, as people know, for the spread of this infection here in the UK and we have contingency plans -- the so-called Plan B.

"But today's announcement, this is about a new variant from South Africa -- it's been detected in South Africa and Botswana -- and this is about being cautious and taking action and trying to protect, as best we can, our borders."

It is the most evolved so far with 32 mutations, and could be worse than Delta, experts have warned.

The variant has not yet reached the UK, with case numbers still small.

South Africa has seen a leap in Covid cases in recent days, with infection of the variant - dubbed Botswana - tripling since it was first found.

It comes after the variant was first found in the neighbouring country two weeks ago.

Less than 100 cases in total have been detected so far, but due to it's complex mutations it has concerned experts.

Professor Tulio de Oliveir, director of Covid surveillance in a South African province, warned it could be in nearly every area of the country.

He said the variant might be better at infecting vaccinated people than Delta, the current global dominant strain, as it has five times more mutations on a specific part that antibodies bind to.

The expert added it had a "very unusual constellation of mutations" and was a "reason for concern".

Prof Francois Balloux, Professor of Computational Systems Biology and Director, UCL Genetics Institute, UCL, said: "I would definitely expect it to be poorly recognised by neutralising antibodies relative to Alpha or Delta.

"It is difficult to predict how transmissible it may be at this stage.

"For the time being, it should be closely monitored and analysed, but there is no reason to get overly concerned, unless it starts going up in frequency in the near future."

But some experts have suggested the multiple mutations might actually work against the virus and cause it to be unstable.

It appears to be an offshoot of an older variant called B.1.1, and has been found in South Africa, Botswana and Hong Kong.

The infection in Hong Kong was from a person travelling from South Africa - sparking fears it could be taken elsewhere.

If it is both better at escaping vaccines and faster spreading it could cause problems, but experts have urged caution as it's monitored.

Dr Tom Peacock, a virologist at Imperial College, tweeted about the find - saying it was the first time he had seen two particular mutations in one variant.

The expert described the mutation profile of the coronavirus as "really awful".

He added: "Export to Asia implies this might be more widespread than sequences alone would imply.

"Also the extremely long branch length and incredibly high amount of spike mutations suggest this could be of real concern (predicted escape from most known monoclonal antibodies).

"Worth emphasising this is at super low numbers right now in a region of Africa that is fairly well sampled, however it very very much should be monitored due to that horrific spike profile (would take a guess that this would be worse antigenically than nearly anything else about)."

Professor Lawrence Young, a virologist at Warwick Medical School, told MailOnline it "looks like" the variant could be better at dodging immunity from vaccines.

But he added: "It's always difficult to say just by looking at [mutations], and so much depends on how the immune system sees the change and responds.

'But it looks like just because of the severe load of [mutations] -- some of which we know about quite a bit in terms of harming transmission -- it looks like it might be slightly more worrying than the South African variant."

The new variant has mutations K417N and E484A that are linked to those in previous strains that were able to dodge vaccines.

And it also has the N440K, found on Delta, and S477N, on the New York variant, linked to antibody escape.

It also has the mutation N501Y that makes viruses more transmissible and was previously seen on the fast-spreading Alpha variant.

New variants are found fairly often, and mostly don't spread over a cluster of cases.

Dr Meera Chand, Covid-19 Incident Director at the UKHSA, said: The UK Health Security Agency, in partnership with scientific bodies across the globe, is constantly monitoring the status of SARS-CoV-2 variants as they emerge and develop worldwide.

"As it is in the nature of viruses to mutate often and at random, it is not unusual for small numbers of cases to arise featuring new sets of mutations.

"Any variants showing evidence of spread are rapidly assessed."

A UKSHA spokesperson said they are monitoring and investigating this particular variant.

It comes after reports super dominant Delta may mutate itself into self-extinction and has already done so in one part of the world, scientists claim.

Japan is recording an insignificant 140 cases a day despite being riddled with the Delta strain only three months ago.

A team of genetic experts in Japan have theorised the sudden slump in coronavirus is because Delta has taken care of its demise through mutating.

Delta was already far more transmissible than the original "Wuhan" China strain of the virus from late 2019.

And other variations of Delta have been shown to cause fewer symptoms, carry immune-escaping mutations, or be even more fast-spreading.